Continuation of the letter published in March 1756 in four parts, over a period four weeks, providing a first person account of the earthquake that happened on the morning of June 7, 1692 in Jamaica... But the mortality which ensued the great earthquake (for they had little ones daily) made greater havock than the earthquake itself. By an account dated the 23rd of September following, almost half the people, who escaped the Port Royal, were since dead of a malignant fever, from the change of air, want of dry houses, warm lodging, proper medicines, and other conveniences.

A transcript is provided, click the button to display. 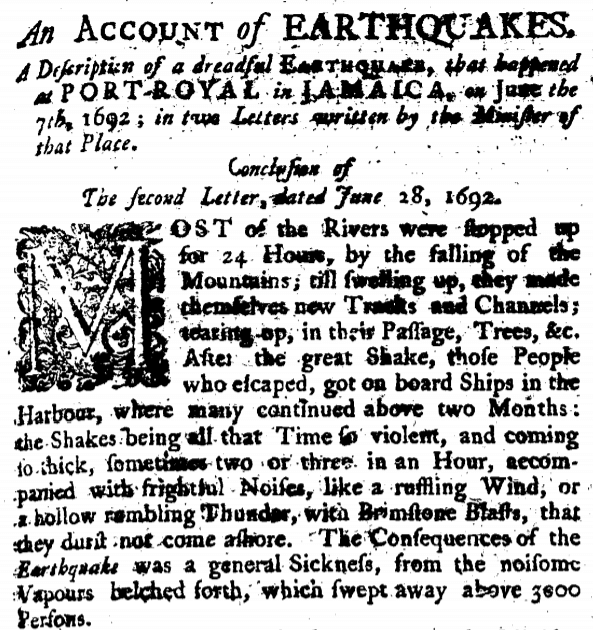 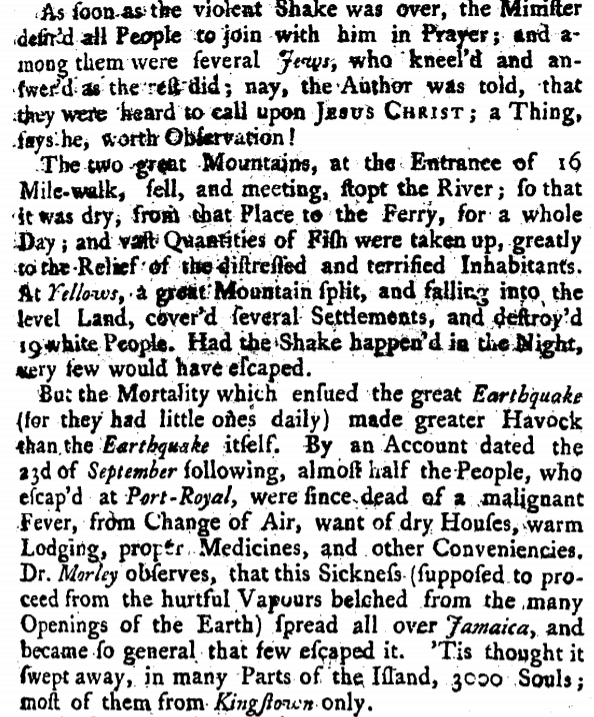 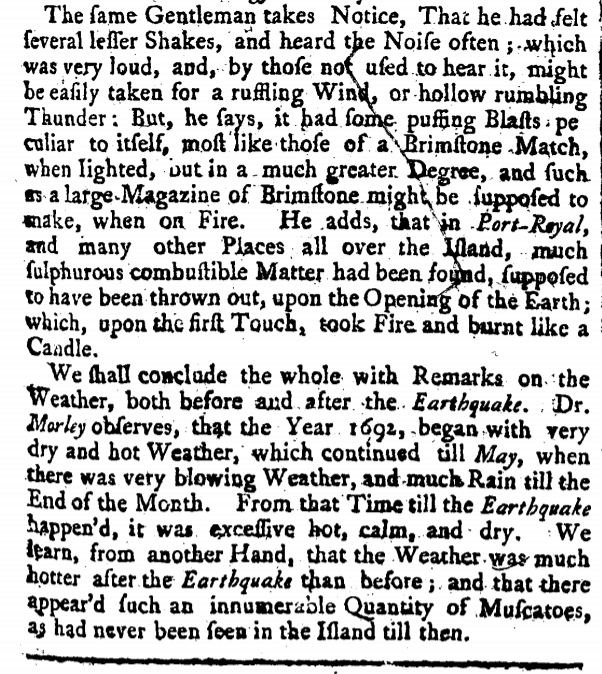 An Account of EARTHQUAKES.
A Description of a dreadful Earthquake, that happend at PORT ROYAL in JAMAICA, on June the 7th, 1692; in two Letters by the Minister of that Place.
The first letter dated June 22, 1692

Most of the Rivers were stopped up for 24 Hours, by the falling of the Mountains; till swelling up, they made themselves new Tracks and Channels; tearing up, in their Passage, Tree &c. After the great Shake, those people who escaped, got onboard ships in the Harbour, where many continued above two Months: the Shakes being all that Time so violent, and coming so thick sometimes two or three in an Hour, accompanied with frightful Noises, like the ruffling Wind, or a hollow rumbling Thunder, with Brimstone Blasts, that they durst not come ashore. The Consequences of the earhquake was a general Sickness, from the noisome vapours belched forth, which swept away above 3000 Persons.

As soon as the violent Shake was over, the Minister desired all People to join with him in Prayer; and among them were several Jews, who kneel'd and answer'd as the rest did; nay, the Author was told, that they were heard to call upon Jesus Christ; a Thing says he, worth Observation!

The two great Mountains at the Entrance of 16 Mile-walk, fell, and meeting, stopt the Rver; so it was dry, from that place to the Ferry, for a whole Day; and vast Quantities of Filth were taken up, greatly to the Relief of the distressed and terrified Inhabitants. At Yellows, a great Mountain split, and falling into the level land, cover'd several Settlements, and destroy'd 19 white People. Had the Shake happen'd in the Night, very few would have escaped.

But the Mortality which ensued the great Earthquake (for they had little ones daily) made greater Havock than the Earthquake itself. By an Account dated the 23rd of September following, almost half the People, who escap'd the Port-Royal, were since dead of a malignant Fever, from the Change of Air, want of dry Houses, warm Lodging, proper Medicines, and other Conveniences. Dr. Morley observes, that this sickness (supposed to proceed from the hurtful Vapours belched from the many Openings in the Earth) spread all over jamaica, and became so general that few escaped it. 'Tis thought it swept away, in many parts of the Island, 3000 Souls; most of them from Kingstown only.

The same Gentleman takes Notice, that he had felt several lesser Shakes, and heard the Noise often; which was very loud, and, by those not used to hear it, might be easily taken for a ruffling Wind, or hollow rumbling Thunder: But, he says, it had some puffing Blasts peculiar to itself, most like those of a Brimstone Match, when lighted, but in a much greater Degree, and such as a large-Magazine of Brimstone might be supposed to make when on Fire. He adds, that in Port-Royal, and many other Places all over the Island, much sulphurous combustible Matter had been found, supposed to have been thrown out, upon the Opening of the Earth; which, upon the first Touch, took Fire and burnt like a Candle.

We shall conclude the whole with Remarks on the Weather, both before and after the Earthquake. Dr Morley observes, that the year 1692, began very dry and hot Weather, which continued till May, when there was very blowing Weather, and much Rain till the End of the Month. From that time till the Earthquake happen'd, it was excessive hot, calm and dry. We learn, from another Hand, that the Weather was much hotter after the Earthquake than before; and that there appear'd such an innumerable Quantity of Muscatoes, as had never been seen in the island till then.