Pirates, often known as buccaneers (from the French "boucan"), filibusters, freebooters, and privateers, reigned supreme throughout the Caribbean region.

Port Royal became a haven for some of the most famous pirates in history, including Blackbeard and Calico Jack. Blackbeard, born Edward Teach, may have been born in Jamaica, but claims to his birth are also made in Bristol, England and in Carolina. Wherever he was born, this feared pirate is said to have led attacks with burning matches woven into his beard.

Captain Charles Vane, another notorious pirate, was captured, brought to Jamaica, and hung at Gallows Point. Jack Rackham, -- known as "Calico Jack" because of his love of colorful cotton clothing -- began his career as a part of Vane's crew.

While "operating" in the Windward Passage between Cuba and Hispaniola, Vane and his crew, expecting little resistance, attacked a vessel. However, it was a powerful French Warship, and after a few shots Vane decided to flee from the battle. The next day, led by his quartermaster, Jack Rackham, his crew accused him of cowardice.  Rackham took over the ship and left Vane behind in a small captured sloop with a few loyal pirates joined him.

Vane quickly captured a couple of small ships and rebuilt his pirate fleet. However, while they were at the Bay of Honduras, a hurricane wrecked his ships and drowned most of his crew. Vane and another survivor, stranded on a small fisherman's island, hoped to be rescued by any passing ships. Unfortunately, his "rescuer" was a former buccaneer, Captain Holford, who knew Vane well. He imprisoned and extradited him to authorities in Port Royal . Vane was put on trial, found guilty and hanged on November 1720.

In late October 1720, Calico Jack's ship was anchored off Point Negril, Jamaica. The crew of pirates were celebrating recent victories in their typical hard-drinking tradition. On board were two of Jack's most fearsome crew members, Anne Bonney and Mary Read, women disguised as men. It was not, however, until the trial of Calico Jack, that it was discovered that these two crew members were actually women.

Near midnight on October 22, Anne and Mary were on deck when they noticed a mysterious sloop gliding up alongside them. They realized it was a navy vessel, and they shouted for their crewmates to stand with them, but most were passed out from the night's drinking. A few, Rackham included, came to assist. The sloop's captain, Jonathan Barnett, in command of the man-o-war Albion, ordered the pirates to surrender, but Rackham began firing his gun. Barnett ordered a counterattack, and the barrage of fire disabled Rackham's ship and sent the few men on deck to cowering in the hold. Outnumbered, Rackham signaled surrender and called for quarter.

Anne and Mary, however, refused to surrender. They remained on deck and faced the governor's men alone, firing their pistols and swinging their cutlasses. Mary, the legend goes, was so disgusted she stopped fighting long enough to peer over the entrance of the hold and yell, "If there's a man among ye, ye'll come up and fight like the man ye are to be!” When not a single comrade responded, she fired a shot down into the hold, killing one of them. Anne, Mary and the rest of Rackham's crew were finally overpowered and taken to Jamaica to stand trial.

Both Anne and Mary were known for their violent tempers and ferocious fighting, and they shared a reputation as "fierce hellcats." Their fellow crew members knew that -- in times of action -- no one else was as ruthless and bloodthirsty as these two women were. "Calico Jack" is well known, but his reputation has survived through the ages primarily because of these two infamous women pirates on his crew.

Jack Rackham was executed, and his body was displayed in an iron frame as a warning to other pirates on a small islet off of Port Royal - one which is known to this day, as Rackham's Cay. Anne and Mary were tried one week after his s death and were also found guilty. But at their sentencing, when asked by the judge if they had anything to say, they replied, "Mi'lord, we plead our bellies." Both were pregnant, and since British law forbade killing an unborn child, their sentences were stayed temporarily.

Mary is said to have died of a violent fever in the Spanish Town prison in 1721, before the birth of her child. Other reports say she feigned death and was sneaked out of the prison under a shroud.

No record of Anne's execution has ever been found. Some say that her wealthy father bought her release after the birth of her child, and she settled down to a quiet family life on a small Caribbean island. Others believe that she lived out her life in the south of England, owning a tavern where she regaled the locals with tales of her exploits. While others say Anne and Mary moved to Louisiana, where they raised their children together and were friends to the ends of their lives. 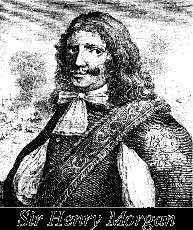 Henry Morgan, in search of fame, fortune and adventure, sailed to the West Indies aboard a ship from Bristol on May 3rd, 1655.  He served in sugar plantations for seven years, learning the "artful ways of the pirates" who visited the islands. When he'd had enough of the plantations and listening to other men's adventures, Henry Morgan set out for Jamaica in 1662, and quickly found himself engaged to join in the exploits of a ship prepared to sail with its crew of British seamen to chase the Spaniards and plunder their richly ladened ships and the West Indian coastal towns.

Henry Morgan immediately made himself a name as a swashbuckler. He and his cohorts were so successful that Morgan's share of the booty bought him a ship of his own. At the age of 29 he was captain of his own vessel, with headquarters and a growing treasure trove in Jamaica. Morgan's courage, ability and reputation won him a promotion from the governor, who made him admiral of the Jamaican fleet, with ten ships and five hundred men under his command.

One vengeful Spaniard, Capitan Pardal, did not fear Morgan. Pardal's sole purpose was to have the opportunity to cross swords with Henry Morgan. In one final frustrated attempt to goad Morgan into a fight, Pardal made a clumsy raid on the coast of Jamaica, set fire to a small village and destroyed its crops. He left the following challenge nailed to a tree near the ruins of the village meeting hall: "I, Capitan Manuel Pardal, to the Chief of the Privateers in Jamaica. I come to seek General Henry Morgan, with two ships and twenty-one guns. When he has seen this Challenge, I beg that he will come out and seek me, that he may see the Valour of the Spaniards."

Morgan saw the note and lost no time in setting sail to hunt down the Spaniard. Morgan found Pardal, chased him ashore on the eastern coast of Cuba, and with just a handful of men and a few muskets set off in hot pursuit. With the first volley from Morgan's sharpshooters, the Spaniards turned and fled in terror. Pardal was shot through the neck and killed with a musket ball from Morgan's own pistol.

Back in port, Morgan was rewarded for his courage with command of the largest fleet ever to set sail from Jamaica. He was put in charge of thirty-five ships and two thousand men. He was just 34 years old. With such a large force behind him, Morgan vowed to destroy, once and for all, the power of the Spanish in the West Indies. He sailed for Panama, the largest and richest town in the Spanish American colonies.

Unknown to Morgan, however, negotiations in London had resulted in peace between Britain and Spain. Urgent orders were dispatched to Jamaica, instructing Morgan not to attack the Spanish colonies. Morgan chose to ignore these orders when they arrived, and carried on with his plan of attack. He reached the mainland and marched covertly across the Isthmus of Panama, upriver towards the city of Panama. Days and nights of trudging through vine-choked forests exhausted his men. They ran out of food and water. Towards the end of their march they ate their leather powder satchels to stave off the pangs of hunger. At one point they came across a stash of casks of wine, but Morgan was over-suspicious and refused to allow even a drop to be tasted for fear the Spanish had poisoned the wine and left it as a trap. The men grumbled and swore oaths of protest, but they went doggedly on. Half the party died through disease and starvation.

On January 18, 1671, as Morgan came upon the enemy he had only a thousand men left, and these were foot-sore and starved. In this sad state, Morgan ordered his army to do battle with a force ten times as large. Morgan's men were weakened but desperate, and the fighting continued for hours. At last, the Spanish fled from the battlefield, but not before three thousand prisoners were taken. Morgan and his forces entered the city, refreshed themselves with food and wine, then began sacking the wealthy city. One hundred and fifty mules were needed to carry the treasure back to the ships; however, tense relations with his men are supposed to have caused Morgan to abscond with most of the booty.

Because Morgan's raid on Panama had taken place after the conclusion of peace talks between England and Spain, he was arrested in Jamaica and extradited to London in April 1672. Two years later the peace was broken and Spain became an enemy of England once more. Morgan paid a huge portion of his treasure to the crown for his freedom. King Charles II knighted Morgan, and returned him to Jamaica as Governor, where he lived as a wealthy and respected planter until his death on August 25, 1688, at the age of 52.