Eye Witness Account of the 1692 Earthquake in Port Royal

The following newspaper article was published in March 1756 in four parts, over a period four weeks. It provides a first person account of the earthquake that happened on the morning of June 7, 1692 in Jamaica. It was captured in two letters written on June 22, and June 28th, 1692 by an eyewitness who was caught up in the earthquake. The letters chronicle the experience and the impact of the earthquake to Port Royal and across the island of Jamaica. The account provides a vivid image of the destruction and sheer terror that those who survived, lived through. Thousands were killed in the quake, buried alive or swept away, with a large part of the town of Port Royal swallowed by the sea. 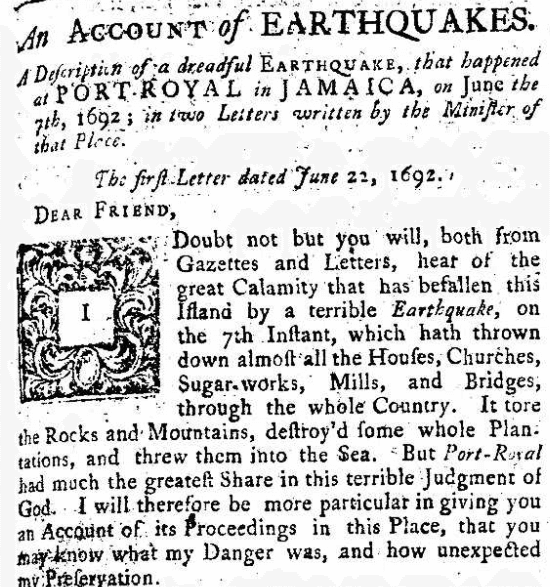 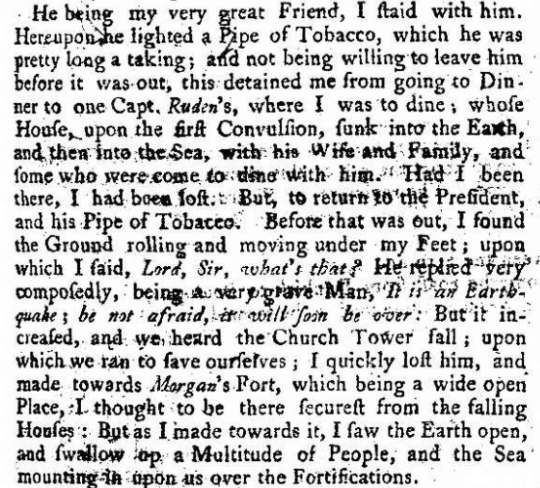 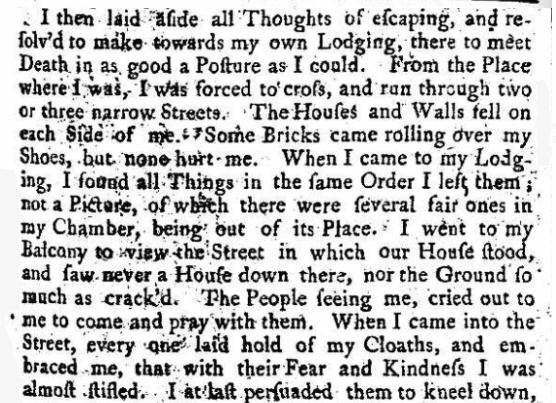 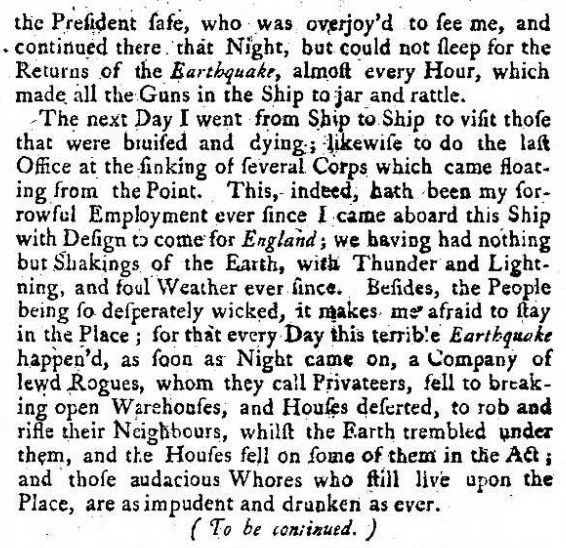 An Account of EARTHQUAKES.
A Description of a dreadful Earthquake, that happend at PORT ROYAL in JAMAICA, on June the 7th, 1692; in two Letters by the Minister of that Place.
The first letter dated June 22, 1692

I Doubt not but you will, both from Gazettes, and Letters hear of the great Calamity that hath befallen this Island by a terrible Earthquake, on the 7th instant, which hath thrown down almost all the Houses, Churches, Sugar-Works, Mills and Bridges, through the whole Country. It tore the Rocks and Mountains, destroyed some whole Plantations, and threw them into the Sea, Port-Royal had much the greatest share in this terrible Judgement of God. I will therefore be more, particular in giving you an account of its proceedings in this Place, that you may know what my Danger, and how unexpected my Preservation.

On Wednesday the 7th of June I had been as Church reading Prayers, which I did every day since I was Rector of Port-Royal, to keep up some shew of Religion among a most ungodly debauched people; and was gone to a place hard by the Church, where the merchants use to meet, and where the President of the Council was, who acts now in Chief till we have a new Governor. This Gentleman came into my Company, and engaged me to take a Glass of Wormwood-wine with him as a whet before Dinner.

He being my very great friend, I staid with him. Hereupon he lighted a Pipe of Tobacco, which he was pretty long of taking; and not being willing to leave him before it was out, this detained me from going to Dinner to one Captain Ruden's, where I was to dine, whose House, upon first Convulsion sunk first into the Earth, and then into the Sea, with his Wife and Family, and some who were come to dine with him. Had I been there, I had been lost. But to return to the President, and his Pipe of Tobacco. Before that was out, I found the ground rolling and moving under my feet, upon which I said, Lord, Sir, what is that? He replied very composedly, being a very grave Man, It's an Earthquake; be not afraid, it will soon be ever. But it increased, and we heard the Church and Tower fall, upon which we ran to save our selves; I quickly lost him, and made towards Morgan's Fort, which being a wide place, I thought to be there securest from the falling Houses. But as I made toward it, I saw the Earth open and swallow up a Multitude of People, and the Sea mounting in upon us over the Fortifications.

I then laid aside all thoughts of escaping, and resolved to make toward my own Lodging, and there to meet Death in as good a posture as I could. From the Place where I was, I was forced to cross, and run through two or three very narrow Streets. The Houses and Walls fell on each side of me. Some Bricks came rolling over my shoes, but none hurt me. When I came to my Lodging, I found all things in the same order I left them, not a picture, of which there were several fair ones in my Chamber, being out of its place. I went to my Balcony to view the street in which our house stood, and saw never a house down there, nor the ground so much as crack'd. The seople seeing me, cried out to me to come and pray with them. When I came into the street every one laid hold my Cloaths, and embraced me, that with their Fear and Kindness I was almost stifled. I at last persuaded them to kneel down, and make a large Ring, which they did. I pray'd with them near an hour, when I was almost spent with the heat of the sun and the exercise. They then brought me a Chair; the Earth working all the while with new motions, and tremblings, like the rollings of the Sea; insomuch that sometimes, when I was at Prayers. I could hardly keep myself upon my knees.

By that time I had been half an hour longer with them, in setting before their Sins and heinous Provocations, and seriously exhorting them to Repentance, there came some Merchants of the Place, who desired me to go on board some ship in the Harbour and refresh myself, telling me that they had a Boat to carry me off. I found the Sea had entirely swallow'd up the Wharf, with all the goodly Brick houses upon it, most of them as fine as those in Chepside, and two entire streets beyond that. From the tops of some houses which lay levelled with the surface of the Water, I got first into a Canoe, and then into a Long Boat, which put me aboard a Ship called the Siam-Merchant. There I found the President safe, who was overjoyed to see me, and continued there that night, but could not sleep for the returns of the Earthquake, almost every hour, which made all the Guns in the Ship to jar and rattle.

The next day I went from Ship to Ship to visit those that were bruised, and dying; likewise to do the last Office at the sinking of several Corps that came floating from the Point. This, indeed has been my sorrowful employment ever since I came aboard this Ship with design to come for England; we having had nothing but shakings of the Earth, with Thunder and Lightning, and foul Weather ever since. Besides the people being so desperatly wicked, it makes me afraid to stay in the place; for that every day this terrible Earthquake happen'd, as soon as night came on, a Company of lewd Rogues whom they call Privateers, fell to breaking open Warehouses, and Houses deserted, to rob and rifle their Neighbors, whilst the Earth trembled under them, and the Houses fell on some of them in the Act; and those audacious Whores that remain upon the Place, are as impudent and drunken as ever.