Continuation of the letter published in March 1756 in four parts, over a period four weeks, providing a first person account of the earthquake that happened on the morning of June 7, 1692 in Jamaica... " It is a sad sight to see all this Harbour, one of the fairest and goodliest I ever saw, covered with the dead bodies of people of all conditions, floating up and down without burial; for our great and famous burial place, called the Palisadoes was destroyed by the earthquake; which dashing to pieces the tombs, whereof there were hundreds in that place, sea washed the carcasses of those that were buried out of their graves..."

A transcript is provided, click the button to view. 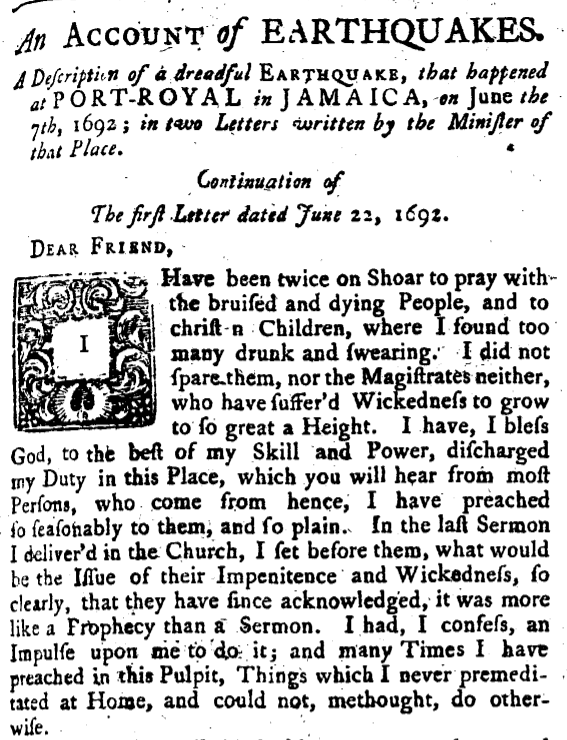 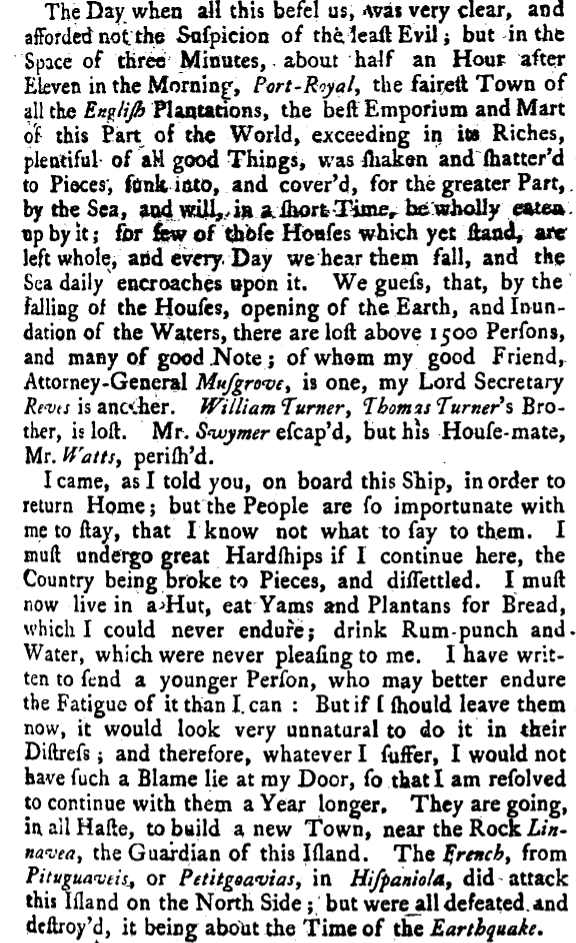 An Account of EARTHQUAKES.
A Description of a dreadful Earthquake, that happend at PORT ROYAL in JAMAICA, on June the 7th, 1692; in two Letters by the Minister of that Place.
Continuation of The first letter dated June 22, 1692

I Have been twice on shoar to pray with the bruised and dying People, and to christen Children, where I found too many drunk and swearing. I did not spare them, nor the Magistrates neither, who have suffer'd Wickedness to grow to so great a height. I have, I bless God, to the best of my skill and power, discharged my Duty in this place, which you will hear from most persons, who come from hence, I have preached so seasonably to them, and so plain. In the last sermon I deliver'd in the Church; I set before them what would be the issue of their Impenitence and Wickedness, so clearly, that they have since acknowledged, it was more like a Prophecy than a Sermon: I had, I confess, an impulse upon me to do it; And many times I have preached in this Pulpit, things which I never premeditated at home, and could not methought, do otherwise.

The day when all this befel us was, was very clear, and afforded not the suspicion of the least evil; but in the space of three Minutes, about half an Hour after Eleven in the Morning, Port Royal, the fairest Town of all the English Plantations, the best Emporium and Mart of this part of the World, exceeding in its Riches, plentiful of all good Things, was shaken and shattered to pieces, and sunk into, and cover'd for the greatest Part, by the Sea, and will in a short time be wholly eaten up by it; for few of those houses which yet stand, are left whole, and every day we hear them fall, and the Sea daily encroaches upon it; We guess, that by the falling of the Houses, opening of the Earth, and the Inundation of the Waters, there are lost 1500 persons, and many of good note; of whom my good friend Attorney General Musgrove, is one, my Lord Secretary Reves is another. William Turner, Thomas Turner's Brother is lost. Mr. Swymer escaped, but his house-mate Mr. Watts, perished.

I came, I told you, on board this Ship in order to return home, but the People are so importunate with me to stay, that I know not what to say to them. I must undergo great hardship if I continue here, the Country being broke to pieces and dissetled. I must now live in a Hutt, eat Yams, and Plantants for Bread, which I could never endure; drink Rum-punch and Water, which were never pleasing to me. I have written to send a younger Person, who may better endure the Fatigue of it than I can: But if I should leave now, it will look very unnatural to leave them in their distress, and therefore what ever I suffer, I would not have such a blame lie at my door, so I am resolved to continue with them a year longer. They are going all in haste, to build a new Town near the Rock Linavea, the Guardian of this Island. The French from Pituguaveis, or Petitgeavias, in Hispaniola, did attack this Island on the North side; but were all defeated and destroyed, it being about the time of the Earthquake.

Ever since that fatal day, the most terrible that ever I saw in my life, I have lived on Board a Ship; for the shaking of the Earth return every now and then. Yesterday we had a very great one, but it seems less terrible on Ship-board than on Shore; yet I have ventur'd to Port Royal no less than three times since its desolation, among the shattered Houses to bury the Dead, pray with the Sick, and christen the Children. Sunday last I preached among them in a Tent, the Houses that remain being so shattered, I durst not venture to preach in them. The People are overjoy'd to see me among them, and wept bitterly when I preach'd. I hope by this terrible Judgement, God will make them reform their lives, for there was not a more ungodly People on the Face of the Earth.

It is a sad sight to see all this Harbour, one of the fairest and goodliest I ever saw, covered with the dead Bodies of People of all conditions, floating up and down without burial; for our great and famous Burial Place, called the Palisadoes was destroyed by the Earthquake; which dashing to pieces the Tombs, whereof there were Hundreds in that Place, Sea washed the Carcasses of those that were buried out of their Graves.

Multitudes of Rich Men are utterly ruin'd, whilst many, who were poor, by watching opportunities, and searching the wrecked and sunk Houses, (even almost while the Earthquake lasted, and terror wasupon all the considerable People), have gotten great riches.