Continuation of the letter published in March 1756 in four parts, over a period four weeks, providing a first person account of the earthquake that happened on the morning of June 7, 1692 in Jamaica... From St Ann's we hear of 1,000 acres of woodland changed into the sea and carrying with it whole plantations. But no place suffered like Port Royal; where the streets (with inhabitants) were swallowed up by the opening of the Earth, which then shutting upon them, squeezed the people to death. And in that manner several were buried with their heads above ground; only some heads the dogs have eaten; others are covered with dust and earth, by the people who yet remained in the place, to avoid the stench.

A transcript is provided, click the button to display. 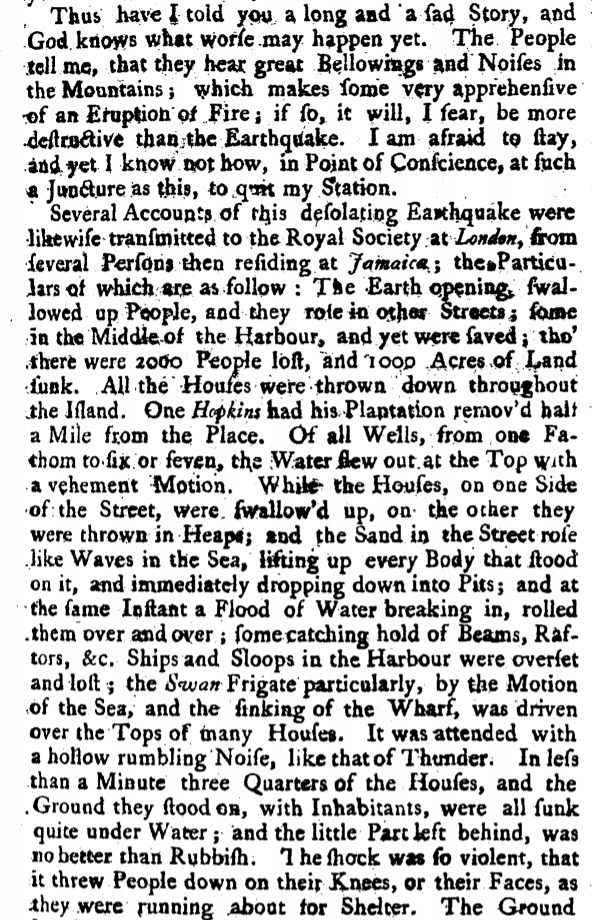 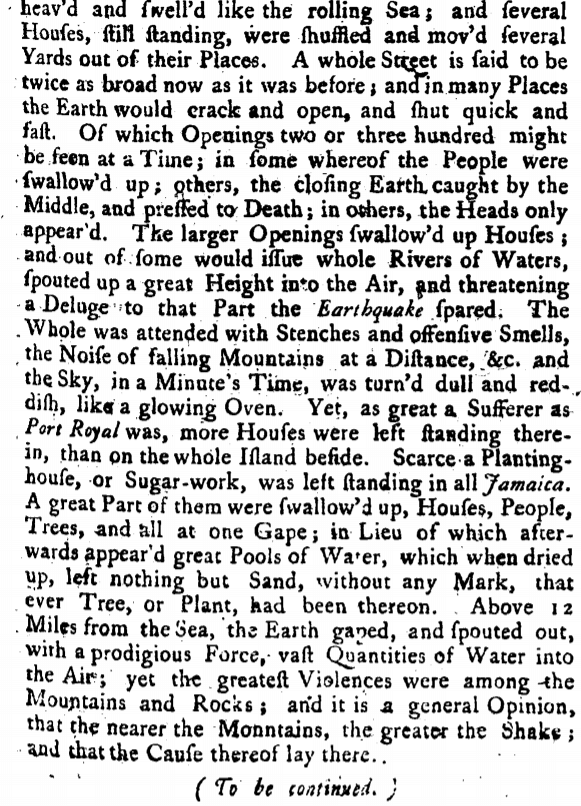 An Account of EARTHQUAKES.
A Description of a dreadful Earthquake, that happend at PORT ROYAL in JAMAICA, on June the 7th, 1692; in two Letters by the Minister of that Place.

We have had Accounts from several Parts of the Island, of the Mischiefs done by the Earthquake. From St Anne's we hear of 1,000 acres of Woodland changed into the Sea and carrying with it whole Plantations. But no place suffered like Port Royal; where the streets (with Inhabitants) were swallowed up by the opening of the Earth, which then shutting upon them, squeezed the People to Death. And in that manner several were buried with their heads above Ground; only some Heads the Dogs have eaten; others are covered with Dust and Earth, by the people who yet remained in the Place, to avoid the Stench.

Thus I have told you a long and sad story, and God knows what worse may happen yet. The people tell me, that they hear great Bellowings and Noises in the Mountains; which makes some very apprehensive of an Eruption of Fire; if so, it will, I fear, be more destructive than the Earthquake. I am afraid to stay, and yet I know not how in Point of Conscience, at such a juncture as this, to quit my Station.

Several Accounts of this desolating Earthquake were likewise transmitted to the Royal Society at London, from several Persons then residing in Jamaica; the Particulars of which are as follow: The earth opening swallowed up people, and they role in other Streets; some in the Middle of the Harbour, and yet were saved; tho' there were 2000 People loft, and 1000 Acres of Land sunk. All the Houses were thrown down throughout the island. One Hopkins and his Plantation remov'd half a mile from the Place. Of all Wells, from one Fathom to six or seven, the Water flew out of the Top with a vehement Motion. While the Houses, on one Side of the Street were swallow'd up, on the other there were thrown in Heaps; and the Sand in the Street rose like waves in the Sea, lifting up every Body that stood on it, and immediately dropping down into Pits; and at the same Instant a Flood of Water breaking in, rolled them over and over; some catching hold of Beams, Rafters, &c. Ships and Sloops in the Harbour were overset and loft; the Swan Figrate particularly, by the Motion of the Sea, and the sinking of the Wharf, was driven over the Tops of many Houses. It was attended with a hollow rumbling Noise, like that of Thunder. In less than a Minute three Quarter of the Houses, and the Ground they stood on, with Inhabitants, were all sunk quite under Water; and the little Part left behind, was no better than Rubbish. The shock was so violent, that it threw People down on their Knees, or their Faces, as they were running about for Shelter. The Ground heav'd and swell'd like the rolling Sea; and several Houses, still standing, were shuffled and mov'd several Yards out of their Places. A whole Street is said to be twice as broad now as it was before; and in many Places the Earth would crack and open, and shut quick and fast. Of which Openings two or three hundred might be seen at a Time; in some whereof the People were swallow'd up; others, the closing Earth caught by the Middle, and pressed to Death; in others, the Heads only appear'd. The larger Openings swallow'd up Houses; and out of some would issue whole Rivers of Waters, spouted up a great height into the Air, and threatening a Deluge to that Part the Earthquake spared. The Whole was attended with Stenches and offensive Smells, the Noise of the falling Mountains at a distance, &c. and the Sky in a Minute's Time, was turn'd dull and reddish, like a glowing oven. Yet, as great a Sufferer as Port Royal was, more Houses were left standing therein, than the whole island beside. Scare a Planting-house, or sugar-work, was left standing in all Jamaica. A great part of them were swallow'd up, Houses, People, Trees, and all at one Gape; in Lieu of which afterwards appear'd great Pools of Water, which when dried up, left nothing but Sand, without any Mark, that ever Tree, or Plant, had been thereon. Above 12 miles from the Sea, the Earth gaped, and spouted out, with a prodigious Force, vast Quantities of Water into the Air, yet the greatest Violences were among the Mountains and Rocks; and it is a general Opinion, that the nearer the Mountatins, the greater the Shake; and that the Cause thereoff lay there.